Continuing with the game plan – ha! I suppose I mean that in the literal, but not traditional manner – Jay and I traveled to Nashville to see a Round 2 game. We’d decided to watch at least one game live per round, assuming we could get tickets, and this round found us at game 2.

One reason I love this team is their involvement in the community. I took this screenshot of their Instagram page, of their pregaming with with the hero from the Waffle House shooting in a Nashville suburb earlier in the week. My family is new to the Preds, so I labeled the guys.

Our pregame looked a bit different, hitting downtown Nashville with Jenny, a friend of Jay’s from his college days. We had a late lunch (or was it an early dinner?) on Broadway and hanging out with some friends who weren’t going to the game. 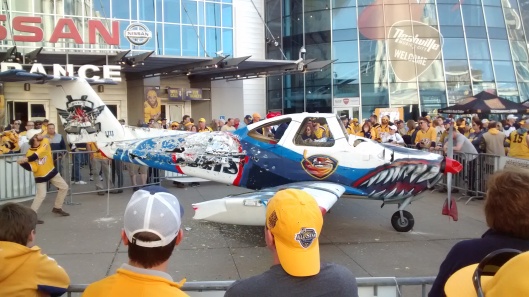 While we always meet up with Jenny during, if not before, the games, this was our first time sitting with her. Hockey fans are a superstitious bunch, and Jay said before the game it was a must-win if we ever wanted to sit with her again!

After 3 periods, the game was tied up, forcing sudden death over time. After twenty additional minutes scoreless, the game continued in a second overtime.

If the lightsabers giveaway were questionable at the beginning of a game which finds many fans drinking beer, by the 2nd overtime they broke the “No Fly Zone” rule. I may have used mine for a few love-taps on the top of a good-natured stranger’s head. 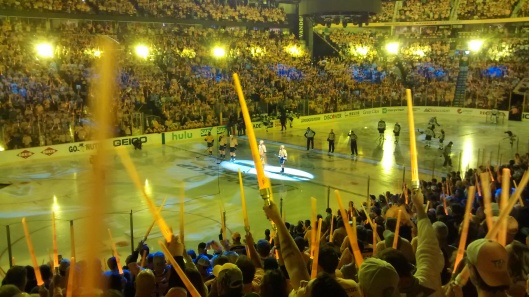 With Fiala’s game winning shot, the sabers were waving as proudly as the flag on the Fourth of July.

After 2 games in Winnipeg, the series returns to Nashville tonight all tied up. Best of 7 wins, and with the series at 2-2 we’re guaranteed at least 6 games. I wouldn’t be surprised if these teams don’t stretch it into 7.