Saturday morning at 9AM, Jay and I loaded up the truck and headed out on the first leg of our 15 day road trip. Day one had the longest stint in the car, although staying 1-2 nights in each place means we’ll be keeping the road hot.

Driving from Camp Fradd to the Air B&B in Annapolis was estimated to take around 8 hours, although we threw an unexpected stop along the way.

Searching “restaurants near me,” we found that we were near Natural Bridge, Virginia. The cafe at the local general store lured us a few miles off the interstate. The soup and grilled cheese sandwiches hit the spot perfectly on the dreary day. 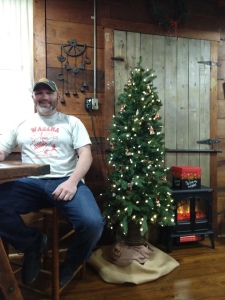 Jay asked the lady behind the counter if the Natural Bridge was worth the stop. She explained that it was an $8 admission, but just a short walk from the museum. She also said that by adding a 0.75 walk past the bridge was a waterfall.

We decided to take the time to see the Natural Bridge, not knowing the history behind the land. I read the information pamphlet as we walked. Legend claims George Washington surveyed the area, leaving his initials behind.

While these claims cannot be verified, someone carved a GW in the rock. The story is widely accepted, and a white box has been drawn around the etching to allow viewers to more easily spot it.

Thomas Jefferson’s dad was reported to have been on the same survey trip as Washington. Reports intrigued the future president, and eventually he purchased the land from the King of England on July 5, 1774.

After his death, the land was sold to pay his debts and remained in private ownership until two years ago. The land, a National Registry of Historic Places site, is now operated by the State of Virginia, in conjunction with the National Park system.

Neither of us had any idea how incredible the bridge would be. Nor did we realize that after exiting Interstate and driving Hwy 11 to the General store we were actually driving on the bridge itself.

Had we not still had 4 hours of driving head of us, we would have probably continued on the trail and spent more time in the area. As it was, we saw the bridge from both sides, then headed back up to the museum.

Thankfully Jay is primary driver on this trip, because driving on I66 through DC is not for the faint of heart. He noted how few pick-ups were on the road, but maneuvered Noah with ease. I named the Chevy Avalanche due to his size, as big as the ark., so this was no small feat on Jay’s part.

We arrived at our Air B&B just before 8. Our host had left us a parking pass, and told us that street parking regulations were enforced strictly. Once again Jay had to be an expert with Noah, attempting to parallel park him on the street.

I felt like perhaps we are the reason some people don’t like overnight rentals mixed into a residential neighborhood. Jay with his big ole truck trying to park amongst all the tiny cars. Me, outside on the sidewalk trying to yell over the vehicle noise.

The spots were too small, and our host let us know that a cross street might be a better option. Here Jay and I found a spot big enough to easily accommodate Noah.

We had planned on walking to dinner, and the cross street parking caused us to take a slightly different route. The homes on our walk were gorgeous, and we only slightly felt bad for taking photos. 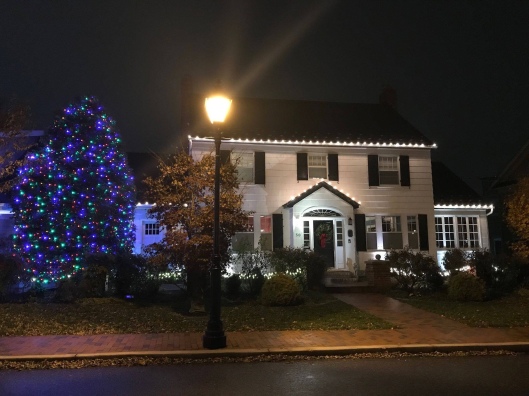 The walk down Main Street was a treat as well. Lights, garland, and wreaths joined the American flags which hung on the lamp posts.

Our restaurant, the Federal House, was located near the pier, in a gorgeous brick building. Jay and I ordered some local craft beers to go with our entrees. For any foodies out there, I got the steak and he ordered the rack of ribs. I’ll spare you the photo because food art is not my forte.

After leaving the restaurant, we walked towards the yachts at the pier, many decorated with holiday cheer as well. We also stopped to read the plaque at the Alex Haley/Kunta Kinte memorial.

On the walk back to our room, Jay noticed a bar with incredible brick architecture. He also needed to use the little boy’s room, so we decided to stop in. We each ordered a pint and took turns visiting the facilities.

As we talked over our beers, Jay noticed a framed newspaper article hanging on the wall behind me. The feature photo was of our bartender that evening. Apparently Peanut is a bit of a local legend, and we had the pleasure of meeting him.

Jay and I called it a night shortly before 11. We would have enjoyed roaming the streets of downtown Annapolis longer, but wanted to be courteous of our Air B&B host, who also lives in the home.

These babies greeted us the moment we walked in the door, and I couldn’t resist snapping this picture. I’m sure one of you dog experts could tell us the breed, but I couldn’t help but remark on how the doggies looked similar to the videos of baby goats in pajamas circling the inter webs.

I hope you’ll forgive any typos or unedited awkwardness in this post. I wanted to get all my thoughts compiled and shared before we move on to our next stop. We will be taking in so much on this trip, it would be easy for the little details to get forgotten and lost along the way.

Next up: Morning in Annapolis at the Naval Yard.