Our morning in Annapolis got off to a bit of a slow start. While Jay slept, I wrote up our day 1 journey from the sitting room of our Air B&B. Apparently he was excited to get going, because at 8am I got a message from him telling me he was getting in the shower

Our host, who lives in the unit, offered me a cup of coffee and we chatted with her for about an hour. Apparently we were in the company of greatness and didn’t know it. Her doggies had both been shown at competitions before coming to live with her, and one had been a 5-time champion!

While it wasn’t the hit-the-ground-running start I had planned on, we enjoyed talking to her and learning a bit about her life. Maybe its the writer in me, but I love meeting new people and hearing their stories.

She recommended breakfast at the Light House Bistro just a few streets over from where we stayed. Created by the Light House Homeless Prevention and Support Center, the bistro gives jobs to those who may be otherwise unemployable to assist them in building a resume. 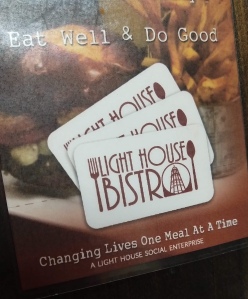 Had we not been told of this social endeavor, we would have not realized it while dining there. The food and service were both excellent. I’m so glad both Jay and I appreciate locally owned restaurants and seek out unique places. 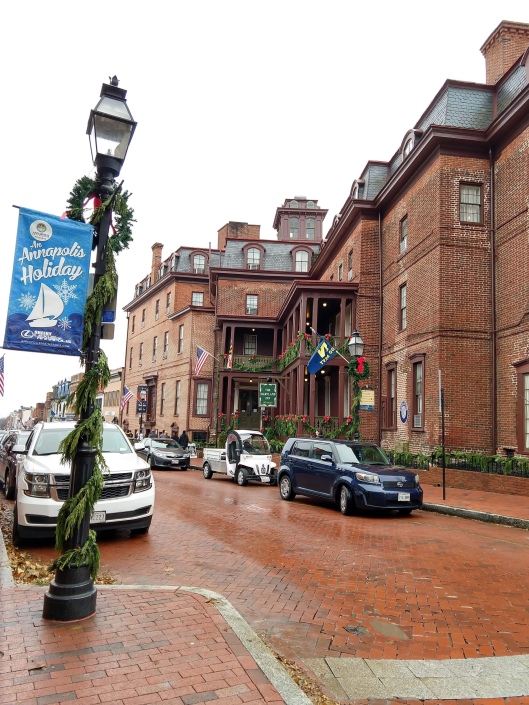 After brunch, we headed back downtown for a little souvenir shopping, then headed towards the United States Naval Academy. Since we only had a few hours in the morning before moving on, we didn’t take a full tour, but did stop long enough to get pictures and read a few of the more interesting displays. 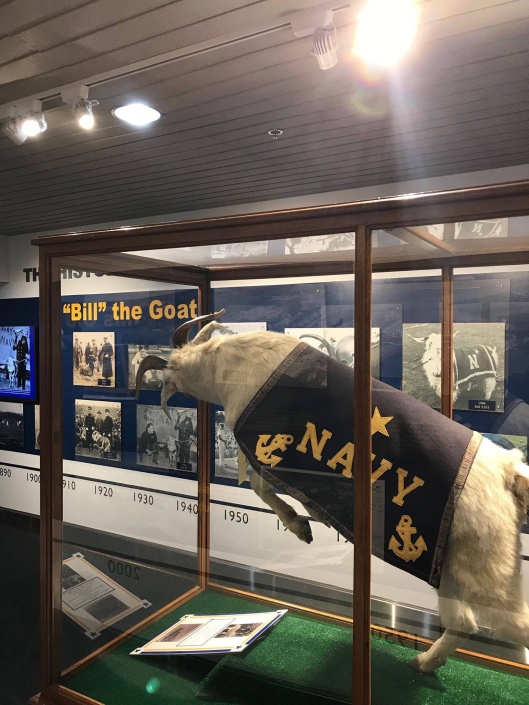 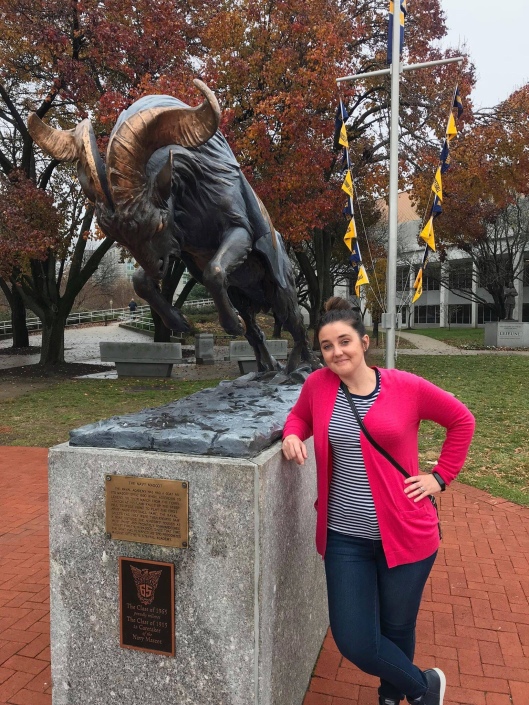 Then we hit the road and headed towards Philadephia. In researching the trip, Jay found that the bigger cities even provided “top holiday event” lists for those of us visiting from out of the area.

Officially in the big city, we had to park about a block away and lug our bags to the Air B&B where we are currently staying. We have the apartment to ourselves here. After dumping our luggage, we settled in to do a bit more research what we would tackled for the night. 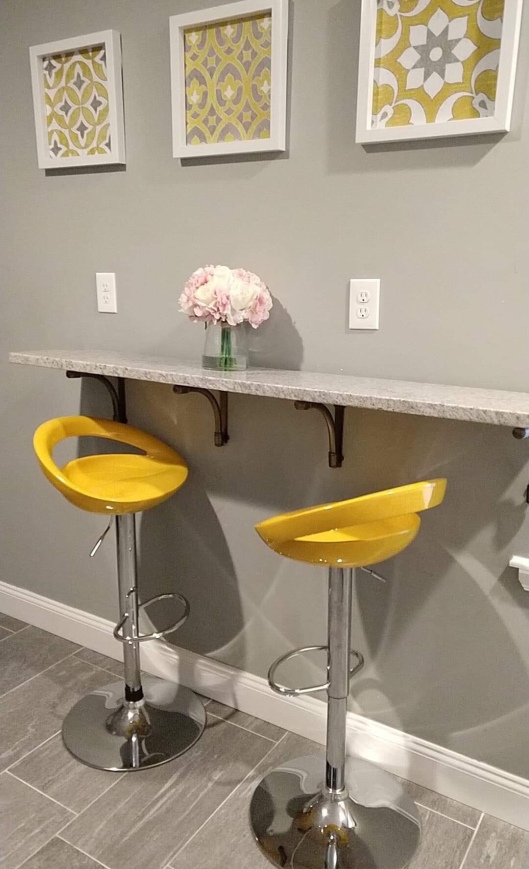 Searching through a few different choices, we settled on a pub for dinner. While I do enjoy new experiences, those tend to take us to similar styles. Craft beer and pub food is our default, and the one we chose did not disappoint. 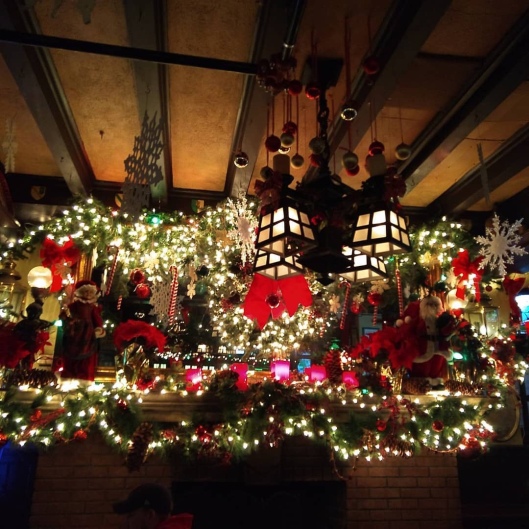 After dinner, we headed to Macy’s to see their light show.

I hate to sound like an ignorant tourist, but I am one. Is there another show tonight? How do we get there? Me to the security guard at one of the store’s entrances.

Apparently it wasn’t flashy enough to entertain the younger generation, the young girl standing beside us got bored. Jay and I, however, enjoyed our time watching, including grabbing pics and videos for the ‘gram. 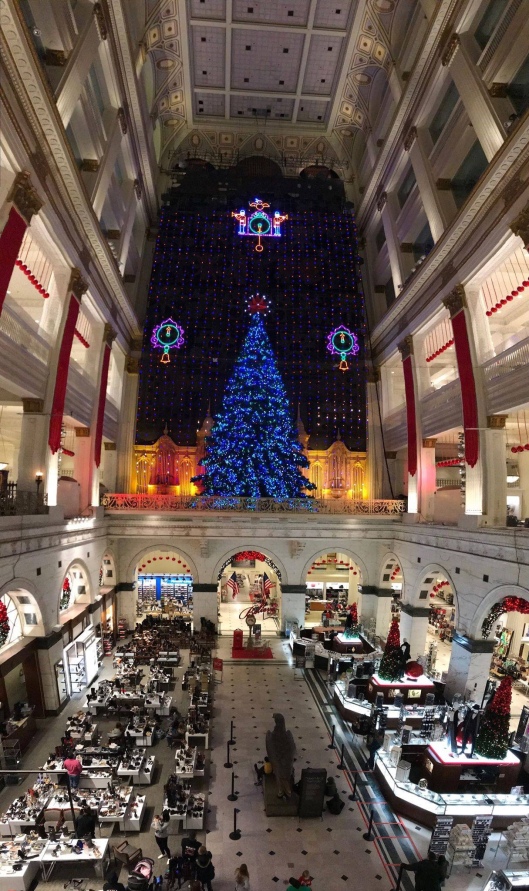 One block over is Philadelphia’s City Hall, gorgeous on its own. Add to it a giant Christmas tree, and my photographer hubby could not get enough. 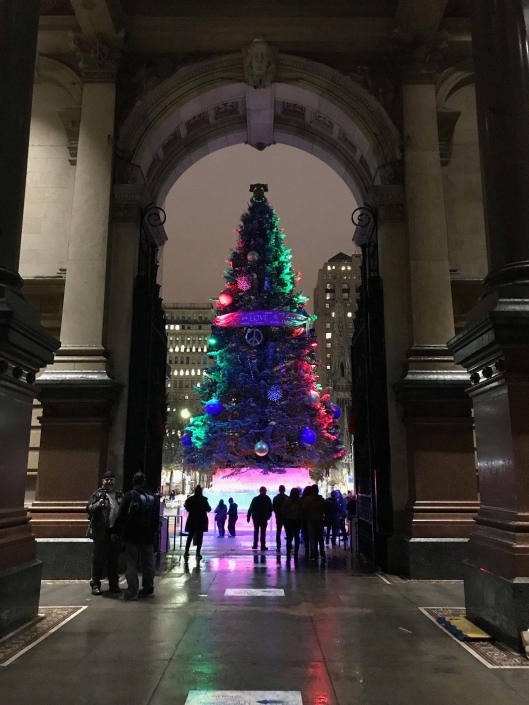 If we go over here, I bet it’ll be a good angle. Wait, what about from here? 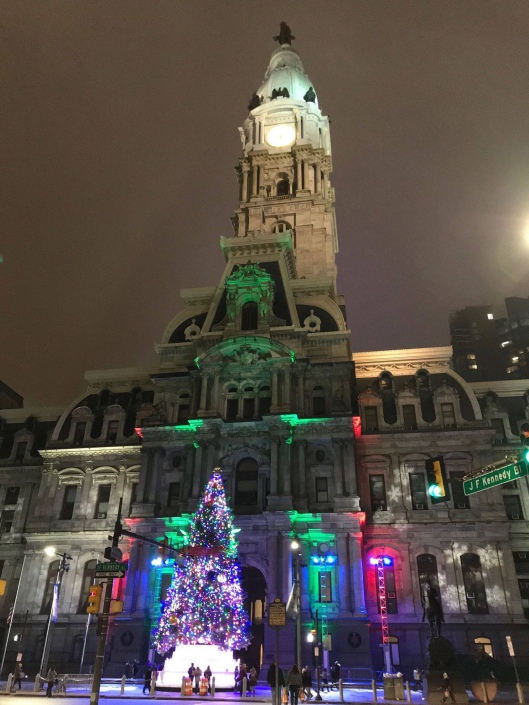 Some of the other items on our list – Christmas Village, the Comcast building show – had closed for the evening. Who knew that the big city rolled up the holiday streets at 8PM on a Sunday evening?

We hit the subway and headed back to the room by 10PM. I’ll admit I was a bit disappointed to not be doing more, but its probably best we pace ourselves. This is only day 2; we’ll never be able to enjoy days 10+ if we wear ourselves out on a daily basis.

Next up: Day 3, Philadelphia